The Bread and Roses art exhibition, in its sixth year, is the result of joint efforts by the Workers Advice Center (WAC-MAAN), Sindyanna of Galilee, and Hanitzotz Publishing House, and it is generously hosted by the Minshar School of Art in Tel Aviv. “From an artistic point of view, this year’s exhibition was broader and richer than ever” say Tami Barka’i and Nir Nader, the curators.

A record 450 artists contributed their work, 44 of them Arab. A hundred participated for the first time. Together, they contributed 600 works of art, some 25% more than last year. Over 1,000 visitors came to the opening event on December 10. Proceeds from the sales have so far reached $120,000, of which 25% is to be handed over to the artists, most of whom struggle to make ends meet. The remainder will be used to assist in empowering Arab women and helping them get work.

There is good reason why curators Tami Barkai and Nir Nader chose Yoel Gilinski’s work as the exhibition’s frontispiece. This painting depicts a cactus growing out of a cottage cheese pot of the Israeli dairy products company Tnuva. The “cottage cheese protest” was one of the most prominent signs heralding the broad protest movement which gripped Israel during the summer of 2011. An anonymous person launched a Facebook page calling for a boycott of Tnuva’s cottage cheese because of its exorbitant price. Israelis love this cheese, and an enormous Tnuva cottage cheese advertisement stands at Ben Gurion International Airport as a symbol of the “return home.” The boycott was so successful (the price dropped by a third) that some claim it dragged Israelis out of their apathy and showed them that getting organized can have an effect. The subsequent wave of protests reached a peak with the demonstration of “half a million” on December 3.

As he worked on the painting, Gilinski probably had no idea of the range of interpretations it would draw from viewers. One visitor to the exhibition, who came with a group of Arab women agricultural laborers from the Baqa al-Gharbiyeh area, noted that the cactus had no roots, it is disconnected from the land and the environment – the cottage cheese pot is just a temporary home and the cactus’ fate is unknown. The others in the group nodded in agreement. What she did not say, because it may have been obvious to her and her companions, is that the cactus plant is so hard to uproot that it remains as the sole silent witness at the sites of Arab villages destroyed after 1948; for this reason it has become a symbol of Arab “sumud” – steadfastness.

Later, a different group stood in front of the painting. One, the daughter of an Arab father and Jewish mother, noted that the cottage cheese is a sign of the Jewish protest movement. Because, despite the initial success, it didn’t succeed in generating the changes as hoped, the cactus—she said—appears dry and barren. Her Jewish friend understood the painting in a different way. For him, the cottage cheese is home, and the cactus symbolizes those Israelis who were born in Israel (known in Hebrew slang as “tsabarim,” the cactus fruit, because their characters are thought by Jewish Israelis to be prickly on the outside but sweet on the inside.

The Bread and Roses exhibition was a special opportunity for the agricultural workers, organized with WAC, to see Palestinian art. Their visit was not a chance event. After all, the aim of the exhibition is to support the project through which they received work placements. These jobs may pay only minimum wage, but at least the workers receive all peripheral benefits. WAC also represents them vis-à-vis the employer, and runs empowerment workshops and cultural and social activities (for further information, see

I was especially pleased when the workers requested a guided tour around the exhibition. But instead of me leading them round, they drew me to works of art that they wanted to understand, to express their opinion or hear other interpretations. I asked them to point out works they particularly liked, ones they would have liked to hang in their homes had they allowed themselves to buy them. 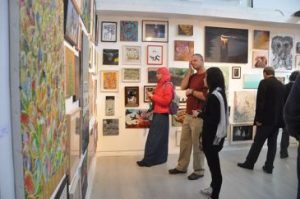 Opposite the cottage cheese cactus, another three cacti were hung. One, by Ron Gang, is abstract and seems to break through to the skies (See more of Ron Gang), and the other two are by Fuad Agbarieh. One of these, an apparently naturalistic work, depicts the background and fruit in gold, giving the piece a supernatural element. Most of the women preferred Agbarieh’s golden cactus, but after gazing at the works a few moments, one of the women noted that Gang’s cactus conveys a feeling of freedom. 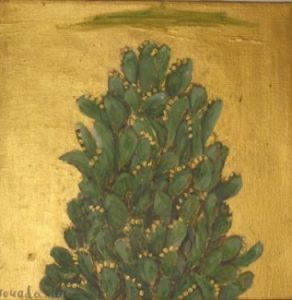 There was one work by Limor Matisis Barnea which intrigued them, and they demanded an explanation. This is an abstract work in earthy colors, in which part of a nude female is slowly revealed rising from the dark tones. I asked them what they saw, and they smiled. I asked if they saw a female body, and they nodded. I asked if they thought the purpose of the work was to evoke desire, and they said they thought not. Finally, I asked if the woman seems weak, subjugated, wretched. They concluded that the work conveys strength and confidence. They stayed looking at the picture for a few minutes.

One of the women drew us towards a painting by Wafa Abu-Awad, “The Leader.” She said she liked the precision, the naturalistic colors of the sea, and the leader rising up from the water, larger than life. She emphasized a number of times that it was “accurate,” and reading between the lines it seemed she was criticizing the Jewish artists whose works were abstract. But as we moved around the exhibition, she saw works by Arab artists who also exhibited abstracts as well as Jewish artists who painted “Arab” landscapes, and the differentiation between Jewish and Arab artists was gradually blurred. This can be seen as a contribution to one of the aims of the exhibition, to drop stereotypes and to foster solidarity between Jews and Arabs, as well as between artists and workers.

← The Arab spring is alive and well and living in Egypt
Urgent: To build a Jewish-Arab leftwing alternative! →